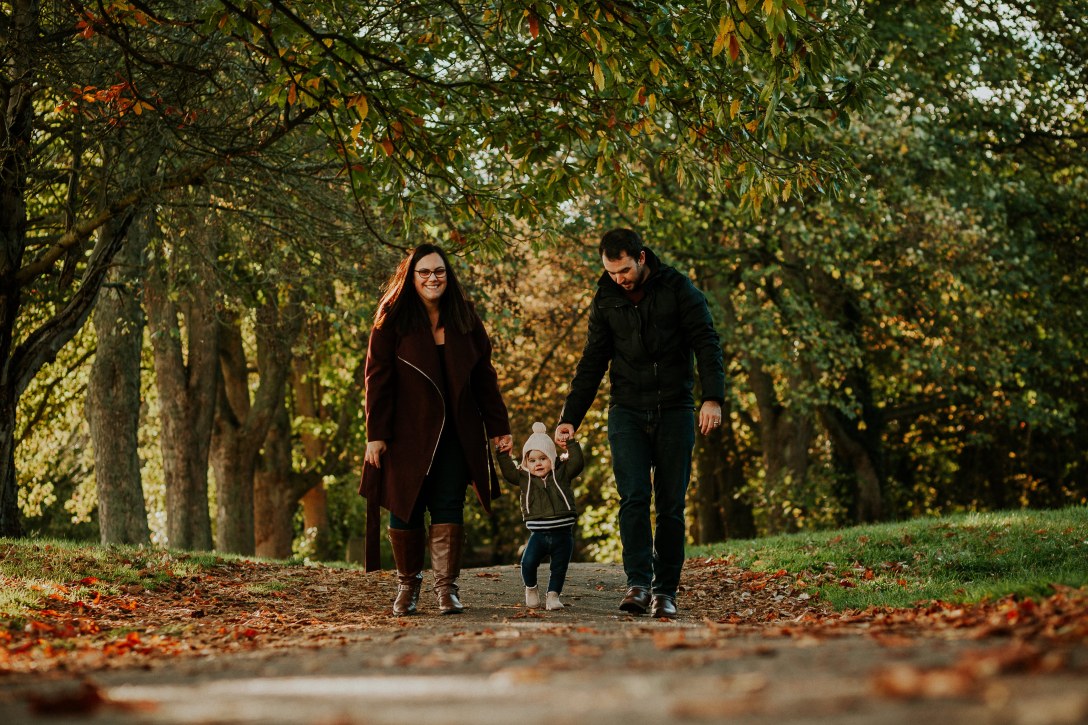 A year ago today we had our wonderful family photoshoot with Sam White Photography who I cannot recommend highly enough for any Surrey mamas. It is also a year ago today that I re-dislocated my knee on this photoshoot the weekend before Steve went away with work for a week and a week before our much needed holiday to Center Parcs.

Two years after dislocating my knee it had happened again but this time I had a 1 year old who had recently learnt to walk and a husband that travelled for work. As well as the pain, the fear was instant on how I would cope. I tried to ignore the pain and hobbled into Kingston thinking it was just a twinge so I could go and buy Amelia’s first pair of shoes with her. But after an hour of intense pain I took myself off to a&e who confirmed what I had feared. Another dislocation and although not as severe as last time (so grateful!) it would still require me to wear a knee brace to immobilise the knee and be on crutches again.

I remember sitting in that room when the doctor told me (all of which I already knew) and I strangely wasn’t thinking about my knee or my recovery but how I would cope looking after a 1 year old and being on crutches. Last time I dislocated my knee it was just Steve and I. Steve didn’t travel for work so logistically I just had to look after myself and to be honest Steve did such an amazing job and his work were so accommodating and supportive. This time around Steve had changed jobs and now travelled quite a bit as well as having Amelia who had only recently started to walk and now wanted to walk all the time. How was I going to look after her immobilised and on crutches all on my own? How was I going to get down to change her nappy or even pick her up and carry her when she cried? I went into a full panic and I won’t lie my anxiety went through the roof. Steve of course said he would cancel his work trip but it was a really important trip and he had been working towards this for weeks. I didn’t want to be a burden again to him like I was last time. I told him to go and that I would be fine but secretly I was on full panic mode.

We made it through the week thanks to my mum, brother and mother in law who all popped in at various times of the day to help with Amelia. Unfortunately Amelia got quite poorly during the week and didn’t want to be anywhere else other than lying on my chest… Not ideal when you are in a knee brace and on crutches. Having these guys pop in to help tidy the house, cook me some dinner or at least try and help with Amelia was a god send and even my childminder helped with pick up and drop offs as I couldn’t drive. The toughest day had to be the day Steve was coming home. Amelia had not been very well at all and was spiking temps of 40 and above which Calpol and ibuprofen was not touching. She just wanted me to hold her so I managed to get on the floor and lie with her on my chest but I was stuck. There was no way I could move so I was stuck there until Steve got home at 11.30pm. Without my injury I would have been able to get up and put her down to sleep in her cot when she was asleep but as I couldn’t put any pressure on my right knee I was stuck! After a horrific night and a call to 111 it ended in a trip to A&E for Amelia. So thankful that all this happened on the day that Steve came home so he could help us and also drive us to A&E.

A year later I have just been discharged from the physio so the injury is still very raw. My knee is not completely better and recovery has been slow but it’s definitely on its way there. My anxiety is however at an all time high. I constantly find I stop myself doing things not because the activity itself is harmful but the fact that it COULD. It’s not just during the out of the ordinary activities but everyday life. Walking up some steps, how I get down on the floor to play with Amelia and most of all going into soft plays with Amelia.

Today on the anniversary I am feeling sick with worry that it’s going to happen again and I keep replaying it all in my head.

Instead of sitting at home I am off to visit my sister in law’s new home. Am I anxious? Yes of course I am but I’ve decided I can either live my life or let me knee limit me. There is a muddy walk planned and the slippery uneven surface makes me feel sick with worry that something will happen but I am going to worry about the things I can control and let go of the things that I can’t. I’ve packed some proper walking boots to provide support and grip and I’ll take it nice and slow taking in the beautiful autumn weather with my family.